Thai Massage - Yoga For The Passive 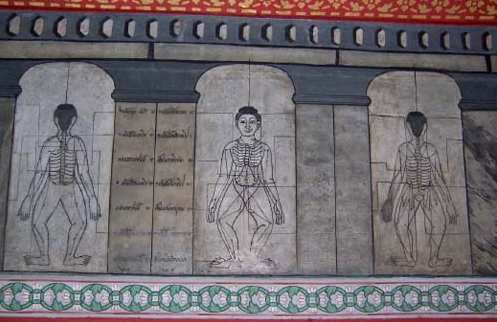 Ever found yourself wishing you were as flexible as your energetic yoga-loving friends, but don’t fancy putting in all the effort that goes with yoga classes? A Thai massage might be just the ticket!

First off, forget what you know about western massage – lying on a table partially clothed and being gently kneaded with oil – and think more like ‘passive yoga’. At its essence, Nuad Boran involves applying both broad and targeted acupressure, finding and dissolving blockages, stimulating energy lines (the so-called sen), combined with yoga-like stretching.

One of our regular clients describes his first Thai traditional massage experience: “I don’t remember too much about the sequence that my masseuse worked through – apart from one incredible twist manoeuvre. I was on my side with her right hand on my left shoulder and her lower leg braced against my thigh. Taking my left hand, she pulled my whole upper body into the air and my spine twisted naturally into a wonderful stretch. Suddenly a month’s worth of stiffness evaporated!”

The techniques themselves are believed to have originated from the Buddha's physician, called Shivago Komarapaj, over 2,000 years ago. Komarapaj featured prominently in early Buddhist scriptures and he is still admired throughout Thailand as a founding father of Thai medicine. In practice, the techniques - as they were handed down through generations - likely incorporated natural changes as well as influences from other south east Asian countries. Today there are wide regional variations in technique, even inside Thailand. Sadly the exact lineage will probably never be known because none of the fragile palm-leaf manuscripts on which techniques were passed on survive today (due to widespread destruction during an 18th century conflict with Burma).

The principal two styles are known as "royal style" and "worker style". The royal style was developed for royalty and nobles, for whom it would have been disrespectful to apply pressure using knees or particularly feet. For that reason it involves the masseuse applying pressure using only her fingers to specific acupressure points. The "worker style", as the name suggests, is a more connected style and involves application of pressure using a combination of fingers, palms, forearms, elbows, knees and feet!

Treatment centres such as the Wat Po school in Bangkok played major roles in keeping the tradition alive. Wat Po is a prolific training centre, and many of the masseuses active in London today, including ours, have been trained at Wat Po. The picture on this post shows epigraphs at Wat Po depicting energy lines and pressure points.

Here in London, mixing traditional Thai massage with more established modalities is common. At Thai Kosai we carry out a hybrid of traditional Thai stretches and western oil-based massage, all on a comfortable massage table.